Highlights from the StepTwo Awards 2019

The Step Two Awards have a full-blown report, packed full of screenshots and details, which is a brilliant purchase and worth a small dent in your budget. This post is about the Awards showcase (and subsequent workshop with Interact Intranets) held in London, where some of the winning sites were discussed. I’ve shared my take-aways about some of the winners I saw below, but I wanted to start with…

Who are Step Two?

Step Two are a digital workplace/intranet consultancy in Australia. They work with all sorts of clients across the globe, but James Robertson and his team don’t hold onto their knowledge – they share it in their vast library of articles.

Their Awards are then judged by intranet professionals – fellow consultants yes, but also practitioners who have consistently demonstrated their ability to build and manage strong sites. Ultimately, Step Two Awards are fantastic awards to win – it says a lot about a company’s site when they do. Here are my personal highlights (NB some of these are phone photos of PowerPoint slides, so forgive the occasional poor quality!): 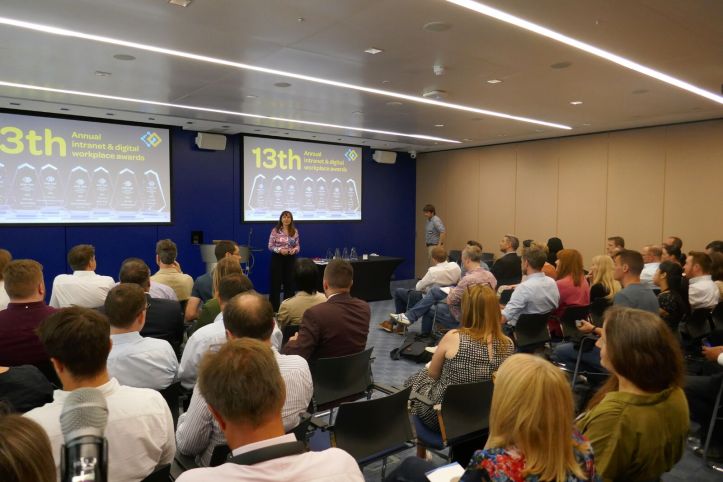 Travelex was the featured case study at Interact’s workshop, and it is an inspirational story. They found that not only were their employees (in 33 countries) mostly lone workers, but they were also lonely workers. They rarely saw managers, only saw colleagues as one of them was starting/ending shifts and had to deal with tricky situations pretty much every day. They launched their intranet with a strong collaboration/social focus, so that people could connect and talk to each other. This social focus extended throughout the company and the CEO’s PA put time in his diary so that he could respond to questions or comments across the site.

They encouraged other senior people within the business to be more open and approachable too. They used video well to get messages out (side note: they found that those with subtitles were watched by more people and more frequently watched to the end), which they filmed using mobile phones and apps, so it was cost effective and engaging. As people engaged with the site more and more, they even became victims of their own success, with their innovation space getting more submissions than they could manage. This led to them rethinking how they could still encourage colleagues to be innovative and send in suggestions, but without overwhelming the admin side of things (by using forms and changing company policy).

The other impressive result of the social engagement on the site, was the introduction of regional sales team competitions. Each was branded by the employees, then entered into an ongoing competition. As they submitted ideas and saw results, they were given points. All this was tracked on the intranet and those that won got a prize, but it also meant that the employees were generating their own training material and up-skilling each other. They were closer as individuals for it, plus also helped the company make more money. Truly amazing case study – the report is worth it for this one alone.

With 90,000 employees across various banking brands, Lloyds Banking Group is rather large! Lloyd’s main focus was to improve collaboration across the Group. It wasn’t an IT led deployment though, but rather a sustained behavioural change programme. They recognised that you have to build towards collaborative behaviours over time, so for this reason the concept of a digital workplace was out – for the moment at least.

As part of this programme they introduced Hive Champions (Hive is the name of their intranet), who actively helped to support and train colleagues. What I really liked about their approach was that Champions could be referred or nominated, plus they didn’t all have to do the same tasks. They earned points for what they did do, and every contribution was seen as valuable. The responsibilities that these Champions held became formalised parts of their jobs, and although they didn’t get paid for the work it did form part of their performance reviews and considerations for promotions and the like.

A global steel producer, NLMK has around 53,000 employees spread over 7 countries. They have introduced an effective digital assistant, which allows them to do things like apply for a vacancy, access the company media bank, or see what benefits they have access to. They have also thought about all the different ways their site could be used practically by the business and mapped out what this means. For example (from one of their slides):

Professional contests online: Contest applications, schedules, and results will be available through the portal only. Awards will be mentioned in a special section of a personal page.

There is a circular issue that plagues intranets: there are low adoption rates, so there is a fear of content being missed, so content isn’t added, which means the site doesn’t have much dynamic content, so the adoption rates stay low… This sort of dedicated and well thought out approach will stand a lot of intranet projects in good stead when being mapped out in the planning stages.

With 22,000 employees (90% of which are drivers or engineers) Stagecoach is the second largest transport company in the UK. The geographical spread and remote nature of most of their colleagues gave the Stagecoach team a large challenge to overcome. They had an intranet already, but for various reasons this wasn’t working for them – so they turned to an employee app to give their colleagues a better experience.

To really focus on their employees needs they turned their attention to all the paper forms that drivers and engineers had to complete. They turned these into fully electronic versions (i.e. not just PDFs loaded onto the site, but created within the site itself) and had the hook they needed to get people using the app. They’ve seen near misses being reported far more than before this piece of work, so not only has the hook worked to get people using the app but it’s also making a real difference to their working lives (and in the area of Health & Safety which is so important).

Another example of user-centred design was presented by BHP, a global mining, metals and petroleum company. They streamed notifications from a variety of systems, plus gave users tools like an interactive world clock (for the different offices across the world). What I particularly liked though was the mention of the persona project they completed.

Personas are often completed as part of the user research phase(s) of intranet (re)design. All too often this process isn’t completed, or personas are left out of the results analysis. But personas provide you with tangible overviews of employee information, bringing a lot of complex information into focus in a digestible format. BHP have said that the persona project helped change their mindset about their users, so highlights what an incredibly valuable exercise this is to complete. 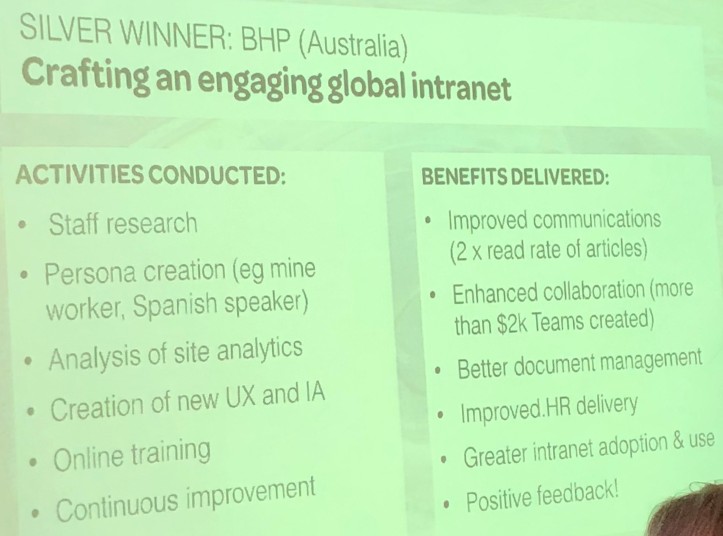 With 7.2million customers, Duke Energy is a large power company based in America with around 29,000 employees. Employee recognition was very high on their intranet project list. This has manifested as an “Employee Connections” area where people can high five each other, see who has been promoted, and look at service milestones. This is very prominent on the homepage and indicates the importance of people to Duke.

Another element to flag from Duke is their design system for all things digital. This was created by the digital team and is for use across the entire business, both internally and externally facing, whenever someone is doing something on/with a digital platform. I’ve highlighted this because it shows how the line between internal and external is blurring, as well as the importance to work consistently across multiple teams and platforms.

Another large banking and financial services company, Wells Fargo has thousands of employees who were placed at the heart of their intranet project. They created an enterprise front door, which built up trust in the system and got people using the various tools on the site. “My Day” was one of the features they introduced, which is a very practical tool to guide employees on what to do and when each day.

One of the most impressive aspects of the site is that there are 50 different homepages, each one tailored and branded for a business unit. While the quantity may seem large, they were genuinely created for and by the different units so that they are as effective as possible for the employees. This is a fantastic example of intranet project collaboration and designing the site with the users at the centre of your thoughts.

Moscow Domodedovo airport is one of the largest in Russia and Eastern Europe, serving 30,000,000 customers a year with 13,000 staff. Their focus was to create a strong knowledge management system, which also encouraged collaboration and needed to be engaging. They used social features to achieve this, through the inclusion of things like blogs, and it has led to a 1.2% improvement in the company’s EBITDA because employees are more engaged and loyal.

But the element that I particularly liked was the way they promoted their site away from digital tools. They created a full PR campaign about the launch of the site, which included posters at bus stops and full billboards. Granted they had the space to do something on this scale, but the approach has inspired me to think about more than just promotional pens for a site launch.

Based in Doha, Ashghal is a Public Works Authority with around 3,000 employees. They had 19 different business solutions and colleagues accessed 5 or 6 every day to complete their tasks. System integration was therefore a huge part of their intranet project. Not only could people access the various systems through the intranet, but notifications and e-requests are surfaced up through it (in real time).

The notifications formed part of an employee dashboard, which also included:

The focus for American Express was how they could resolve IT issues for their colleagues more efficiently. This has led to an omni-channel servicing and support experience, starting with a concierge and leading to a chatbot. If the tech can’t help, then it passes on the employee to the helpdesk who will take over the desktop to resolve the issue.

What I liked about this was the seamless approach between the tech and people. The tech genuinely tries to work out problems and will only pass people on where necessary. This has saved colleagues time and has also reduced the cost of their helpdesk. It’s exciting to see how a chatbot can be well utilised when it has a focus, which is worth keeping in mind when exploring this sort of tech.

I’ve tried to keep this short, but appreciate there’s quite a lot to take in and it only scratches the surface! The Step Two report and presentation day provide a lot more information about each of the winners and there are some really great ideas that can be adopted to intranets.

But what was the main thing I took away?

Well, as with all things – don’t do anything that isn’t right for your site and users. The consistent aspect of each of these successful intranets was how they’ve kept their users at the centre of what they’re doing. Everything has been designed with the user in mind.

This then manifests itself as these 3 areas: